Triselecta guarantees the quality of all its products, totally natural, free of additives and artificial colourings. We scrupulously select the best ingredients to obtain the best product.

The production process is completely handmade, preserving the main qualities intact for a healthier cuisine.

Specialists in saffron since 1998.

A saffron of high cuisine

Our saffron is an international benchmark in haute cuisine. Pepe Sanchís, twice best paella chef in the world, Dabiz Muñoz from Diverxo, Sergio Garrido, from the Taste Institute and Chary Serrano, from Masterchef, are just some of the chefs who have full confidence in the superior quality of Triselecta saffron.

Proof of this is the international recognition through the Superior Taste Award held in Brussels in 2021 by the International Taste Institute. The independent jury, made up of more than 200 multi-award winning chefs, as well as the best sommeliers in the world, carry out a blind tasting in complete silence based on the 5 criteria of the International Hedonic Sensory Analysis. This group of gastronomy professionals endorse the excellence of the flavour of Triselecta saffron.

A process with high quality standards

Our saffron,
from Spain to the world.

Saffron is a natural spice extracted from the stigmas of the flower of Crocus Sativus L. The word saffron comes from the Arabic Zahafarn, which in turn comes from the Persian Safra, which translates as yellow.

It was originally cultivated in the region of Cilicia, in the southern part of present-day Turkey, specifically, its origin is established in a locality called Corycus, hence the name of the plant from which it is extracted.

Since then, its cultivation and trade have been present in all civilisations, as it has always been a highly appreciated product. There are records of its cultivation in Mesopotamia and Persia where it was used for tinctures, medicines, condiments, perfumes and aphrodisiacs. It was in Persia that it began to be used in combination with rice, and its use later spread to China and India.

Saffron was introduced into Spain by the Arabs between the 8th and 10th centuries, becoming an irreplaceable condiment in Spanish-Arabic cuisine. Its use then spread to France and Germany, finally reaching England in the 14th century. 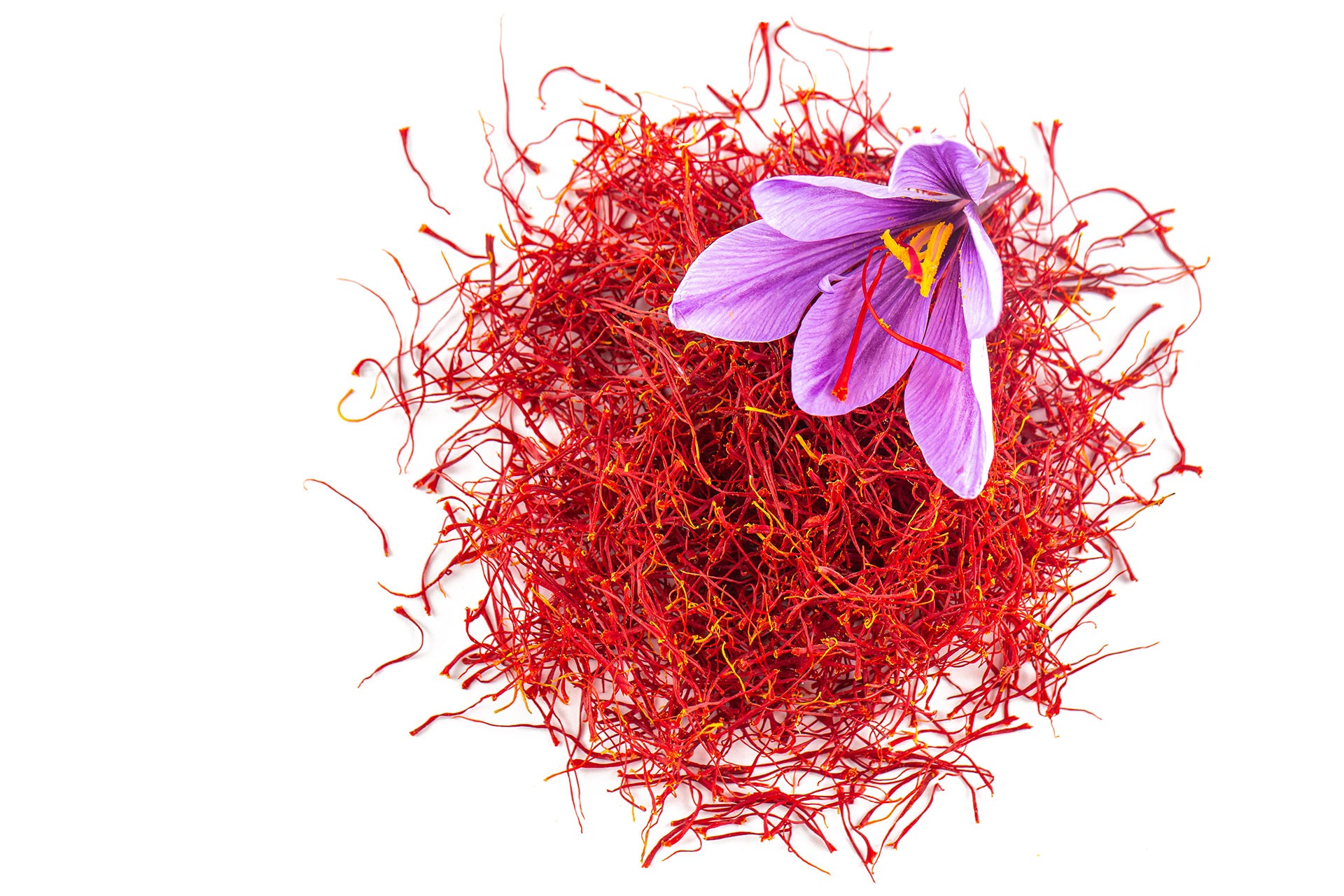 Saffron was cultivated from that time onwards in Spain, specifically in the region of Castile, later trying to establish itself in New Spain, specifically in the province of Tlaxcala. There was also significant saffron production in France in Gàtinais and above all in England, with production concentrated in the area around Saffron (saffron) Walden, with a product of excellent quality that was used in a multitude of dishes and with which prosperous trade routes were established.

Saffron flowers bloom in mid-October, when the cold weather sets in. They are purple in colour and really beautiful with three long, red stigmas. Their intense and penetrating aroma and flavour awaken all the senses. Saffron is handled entirely by hand and no artificial ingredients are added.
Saffron is widely used in thousands of preparations all over the world. It is an essential ingredient for some
of the most famous dishes such as Spanish paella, boullabaise, rice biryani, Swedish lussekatters and Italian risottos. 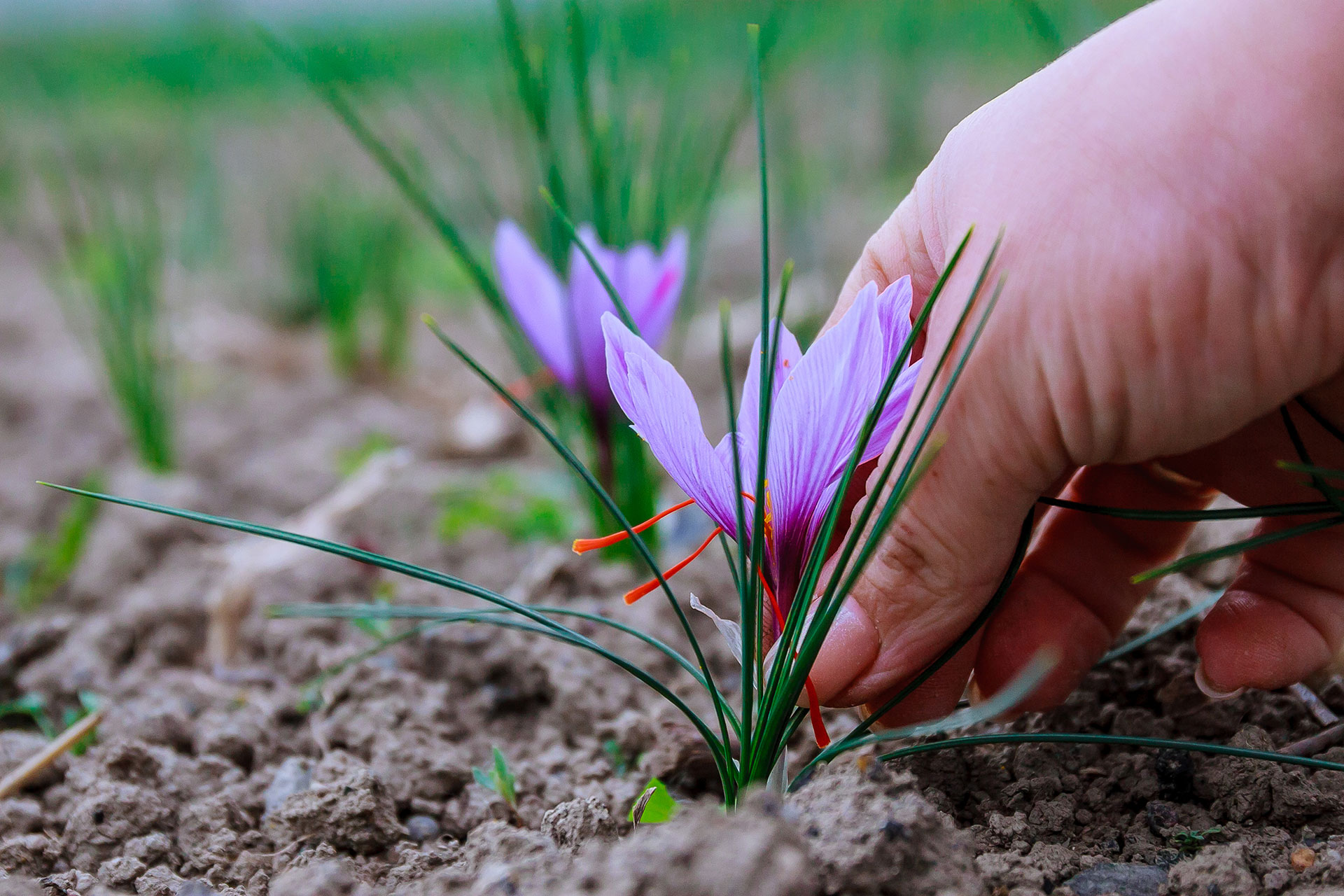 It starts with the planting of the bulbs in May or June, depending on the region. Each bulb starts to sprout one or two stems, which become visible at the end of September. Flowering occurs between mid-October and December and signifies the culmination of a long process.

It is necessary to say that the process of obtaining saffron is completely manual and without adding any artificial ingredient. It begins with the cutting of the ‘saffron rose’, which is carried out over the course of 20 to 25 days, as harvesting cannot be postponed. It is done in the early hours of the day with baskets of flowers in which they are carefully placed.

Afterwards, the flowers are unbranned, an extremely important operation, which involves cutting the stigmas just below the intersection between the stigmas and the style, neither higher, as they would be separated, nor lower, as the remains of the style would remain.

Finally, the stigmas are toasted on trays in layers of 2-3 cm, kept over a low heat at a temperature of about 35 ºC, so that they neither burn nor separate. The optimum roasting point is when the stigmas have lost between 85 % and 95 % of their moisture content, turning from a bright red to a dark, opaque red colour with a characteristic aroma.

We carefully select our saffron from only the best sources to ensure that it meets the ISO3632 standard and, of course, is 100% pure. We have our own laboratory and continuously carry out tests in our independent laboratories.

Our facilities are updated every year to ensure product safety and only the best for our customers. We have an X-ray scanning system and magnets so that our product is completely free of any foreign matter.

Our company has all major quality certifications such as ISO9001, ISO14001 and IFS. Please click on the logo to download our certificates.

Triselecta® is also proud to be a member of Landaluz. It is made up of the most important fine food producers in Andalusia.

You can find out more about which cookies we are using or switch them off in settings.

This website uses cookies so that we can provide you with the best user experience possible. Cookie information is stored in your browser and performs functions such as recognising you when you return to our website and helping our team to understand which sections of the website you find most interesting and useful.

Strictly Necessary Cookie should be enabled at all times so that we can save your preferences for cookie settings.

This website uses Google Analytics to collect anonymous information such as the number of visitors to the site, and the most popular pages.

Please enable Strictly Necessary Cookies first so that we can save your preferences!